Piriformis Muscle – Where Is It And What Is It`s Function

Piriformis muscle or commonly called Pear muscle, is part of the group called muscles of the gluteal region. The group is formed of ten muscles, divided into three layers:
–          Fist layer is made of the following muscles: gluteus maximus muscle and tensor fasciae latae muscle

All the muscles of the gluteal region attach to the bones of the pelvis and extend to the greater trochanter (on the femur) and most of them are innervated by the sciatic nerve, the longest and thickest nerve in the human body.

This muscle originates from the anterior side of the sacrum and is attached to the greater trochanter on the femur. Its inner part helps build the muscle wall of the Pelvis and the outer part (along with the others) makes up the gluteal muscle region. 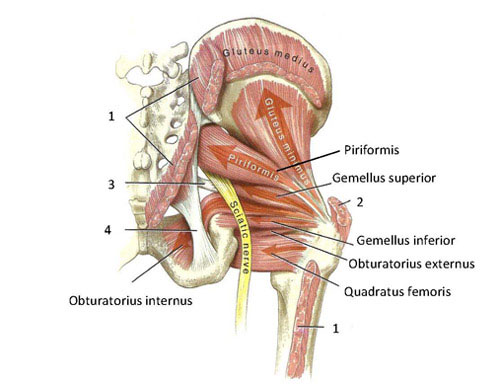 Piriformis muscle can be described as elongated, flat muscle, triangular in shape. Three of it`s strong upper digitations form the upper attachment which is located on the front sides of second, third and fourth sacral vertebrae. It then extends outward and passes the pelvic cavity through the greater sciatic foramen. And finally reaches and inserts to the upper edge of the greater trochanter.

In the gluteal region, Piriformis is located between gluteus minimus and gemellus inferior. For such a small muscle, it is very important and it has a vital role within the human body, especially because of the relations it has with other muscles, blood vessels and nerves of the hip region.

Main function of this little muscle is lateral rotation of the hip and abducts the flexed thigh. It may not seem like much but this tiny muscle actually keeps us from falling, because, during walking, it shifts the weight to the opposite side of the foot that is being lifted.

Do You Have A Dislocated Rib? - Find Out How It Feels: