A while back we published an article titled “Do You Really Need A Back Surgery?” Even though the data used in the article is not that fresh (information used refers to the year 1995.), a more recent research  in the Ohio Bureau of Worker`s Compensation showed that disk fusion surgery performed to relieve/cure lower back pain had an incredible 74% failure rate (you can read more about it at Chiro.org)!

As you can see, surgery is not always the best solution, unfortunately. But, if the pain does not go away after non-surgical treatment, surgery is the only remaining option…

Today, we decided to talk about the effectiveness of another kind of surgery – Tenotomy for piriformis syndrome pain relief. Tenotomy is quite different, compared to the disk fusion surgery we mentioned above, and the reason we decided to talk about it is because it has proven to be a fairly successful procedure to deal with pain from piriformis syndrome.

Simply put, tenotomy is the cutting of a tendon; it is also called tendon release 1. But why would anyone want their tendon cut? Well, usually because the muscle became shortened and resistant to stretching, or if the muscle developed improperly.

In these cases, the tendon is cut (partially through or entirely), to allow the muscle to be stretched.

The procedure is usually performed under general anesthesia but in some cases (such as Achilles tendon tenotomy), it can even be done under local anesthesia. The aftercare depends on the severity of the surgery and the patient will usually receive pain medication ranging from over-the-counter pills to stronger, intravenous meds.

Good thing about this surgery is that it carries a small risk of infection or bleeding.

The study we will be talking about today is a 1 to 16-year follow-up study which involves 19 patients with piriformis muscle syndrome 2.

Both sciatic nerve and piriformis muscle (along with gluteal vessels and surrounding structures) leave the pelvis through the greater sciatic foramen. Close proximity of these structures can cause pain and lead to piriformis syndrome. Most common, non-surgical, treatment for PS includes:

There have been studies describing successful operational treatment but long-term follow-ups (such as this one) are rare.

This study was conducted on 19 patients, operated between 1981. and 1997. There were 14 women and 5 men, between the ages of 24 and 64. They all complained of deep buttock pain and posterior thigh pain.

All the patients had a tenotomy of the piriformis muscle at the attachment on the greater trochanter (see the image below, ignore the X`s and dashed line). 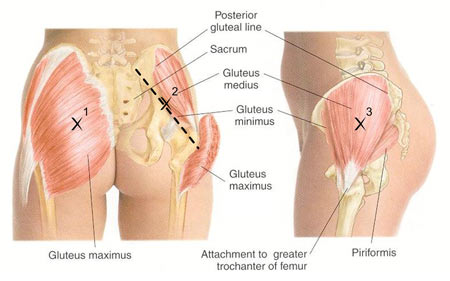 Follow-up showed that 8 patients were relieved from pain, while in others results varied: five had fair while six had  poor results.

And here is a breakdown based on the type and cause of pain:

As you can see, the study showed favorable results in more than two-thirds of the patients treated with tenotomy; however, there was a great difference in preoperative duration of the symptoms (1-30 years) and time of the postoperative evaluation (after 1-16 years), which is why this study group can`t be considered homogenous.

Find Out What Causes Waist Pain And How To Treat It

Piriformis Muscle – Where Is It And What Is It`s Function