As evident from the image above, abdomen is divided into four quadrants: upper left, upper right, lower left and lower right. This division is made by vertical and horizontal lines which go through the umbilicus.

These lines and planes divide abdomen into 9 regions:

Epigastric region is located in the upper, middle section of the abdomen and, rather than thinking of it a muscle or an organ, you should think of it as an anatomical region which “contains” parts of liver and stomach, along with pancreas and duodenum.

The following article will be covering several different topics:

As previously stated, epigastric region is located in the middle, upper section of our abdomen, just under the rib cage. It is also the exact spot where the Heimlich maneuver(emergency technique for preventing suffocation) is applied. 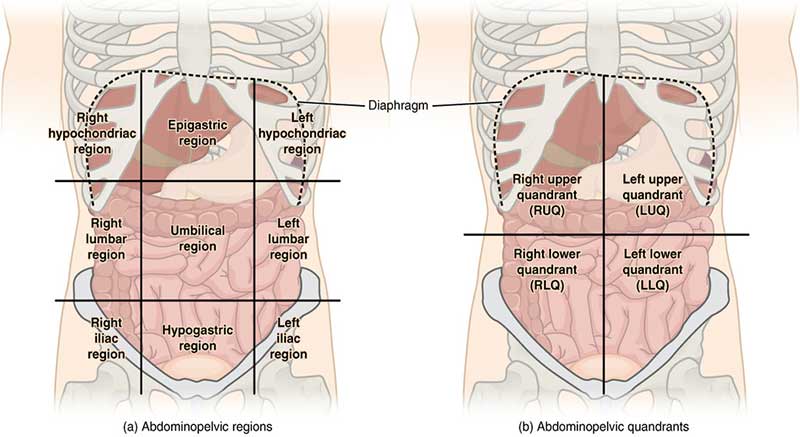 Symptoms Of Epigastric Problems After Eating

Obviously, the main symptom is pain felt above the navel, which can sometimes radiate down the abdomen and towards the back. The intensity of the pain may vary, it can be mild but sometimes people complain about sharp, stabbing, intense pain.

The duration of the pain will also vary – from 5-10 minutes to an hour or more. The pain may also go away and return through the day, regardless of eating.

Other common symptoms include:

Causes Of Pain In This Region

Due to its location, diagnosing a specific cause of pain is epigastric region is tricky, which is why it is not recommended to engage in self diagnosis. There are a lot of possible causes, conditions and disorders which may lead to this pain; and in the following paragraphs we are going to cover the most common ones:

The Food We Eat

Most common cause of epigastric region pain is intolerance to certain foods, milk or carbohydrates for instance. Carbohydrate intolerance may lead to a whole range of problems, among which are painful spasm in the upper abdomen area, inflation and inflammation.

In the first 1-2 hours after the meal concentration of hydrochloric acid in the stomach increases, in order to help with the food digestion process. This process is completely normal but it may cause that upper abdomen pain people complain about after eating.

An ulcer is a break in the lining of the stomach(or intestines) which may cause pain, burning sensation, vomiting or excessive belching.

An ulcer in the stomach is known as gastric ulcer and the one at the beginning of the intestines is called duodenal ulcer. 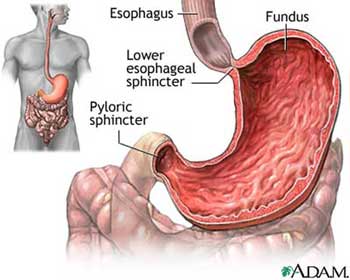 Chronic gastritis is one of the less common causes of epigastric pain after eating; this condition is a result of an inflammation of the lining of the stomach.

It is usually accompanied by nausea, vomiting, heartburn, constipation or bloating.

Pylorospasm is a condition characterized by spasmodic contractions of the pylorus 2. Pylorus is located at the transition between stomach and duodenum.

This condition is most common after eating and will often cause vomiting. As a result, the patient might lose significant amount of weight since the food does not have the time to digest.

Problems with pancreas are a fairly common cause of epigastric pain after eating, and may cause intense, acute pain which radiates towards the back.

Though cancer is one of the least common causes of pain in the epigastric region after eating, we feel obligated to mention it.

Diagnosis Of Pain In The Epigastric Region

As you can see, there are a lot of potential causes of pain in this region, which is why it is absolutely vital to turn to professionals. Depending on the severity of your condition, the doctor may order a whole range of different tests.

Blood test is commonly done in people with epigastric pain, and its goal is to give a better insight into liver and pancreatic enzymes.

Endoscopy is a nonsurgical procedure used to examine the digestive tract. Endoscope is a flexible tube with a camera and a light at the top; and your doctor might use it inspect esophagus and stomach visually and uncover potential problems. Another added benefit of endoscopy is the ability to perform a biopsy – “take” a tissue sample for further analysis.

Not as common diagnostic procedure, but it can be used to uncover potential masses and/or obstructions located in the abdomen.

One of the most common diagnostic procedures used to check organs and other soft tissues in the problematic area.

Ways Of Treating Epigastric Pain After A Meal

Treatment will largely depend on the underlying cause of you epigastric pain. But, some of the most common causes of acute epigastric pain after eating will go away on their own without any sort of treatment. But if you notice this pain becoming more intense, more frequent and longer lasting, you should seek medical help.

Commonly, this condition is addressed with:

Black Specks In Stool – Should You Be Worried?

Orange Diarrhea – What Causes It And How To Treat It!