Watery Discharge – Should You Be Worried Or Is It Normal?

Watery Discharge – Is It Normal?

First of all, we’d like to get one point across – watery discharge is a completely normal bodily function, and it is produced by the walls of the vagina and the cervix. In fact, we can say it’s a healthy thing since this is how body flushes waste out of a woman’s organism.

Our body fights microbes and harmful bacteria on a daily basis, and during this struggle, it produces acids which push our pH levels out of balance. And the way a woman’s body restores normal pH levels is by excreting this discharge.

One of the principal roles of this discharge is protective. It will save the uterus by flushing out microbes and bacteria before they even come near it. So, if you see that your discharge is clear, that’s a sign that everything is good, and that your body is healthy.

There is one instance where the watery discharge will change, this is during the fertile period. Of course, the level of change may vary from woman to woman, but in most cases, this discharge will become creamy.

This slight change is not a cause for concern, as the sperm cells will actually “use” it to get to the egg cell. On the other hand, there are instances where you should be worried about your vaginal discharge.

Ideally, you should know your body well enough to realise when the discharge is normal, and when something strange is going on. Each woman is different, and this watery vaginal discharge can vary. But, here are some of the most common cases that require immediate medical help:

Bacterial vaginosis is an imbalance of bacteria already present in a healthy vagina. One particular bacteria can cause these problems; it’s called Gardnerella, which population might spread and “overpower” all other.

Other bacteria which can cause these problems are Lactobacillus, Bacteroides, and Peptostreptococcus.

Before you start to panic, know that this condition is not at all dangerous, in fact, women often don’t even notice they have bacterial vaginosis.

The main symptom of this condition is a yellow discharge, but other symptoms might also present themselves. These are a fishy smell, vaginal itching, and even pain during urination.

Bacterial vaginosis is easily treated with antibiotics in the form of a pill or cream. Commonly used medication is Metronidazole tablet or a gel.

Chlamydia is a common sexually transmitted disease; it affects both man and women but mostly women. The cause of chlamydia is a bacteria Chlamydia trachomatis. The god thing about chlamydia is that it often doesn’t even show any symptoms and discomforts, and is easily treated with antibiotic therapy.

The disease can infect:

Trichomoniasis – this disease is also sexually transmitted, and it is caused by a protozoan parasite called Trichomonas vaginalis. The diagnosis can be a little tricky here because symptoms are similar to other STD, so a lab test is necessary.

Symptoms of trichomoniasis are;

This disease is also more common in woman, but male patients will feel it as well since it will cause painful urinations and discharge from the penis.

Commonly prescribed medication for this condition are Flagyl and Tindamax. It’s important to note here that drinking alcohol is strictly forbidden while being treated with this medication, as drinking it can cause nausea and vomiting.

Though the disease is relatively easily cured, in most cases, it comes back after you’ve finished with your treatment. For this reason, patients are advised to wait at least two weeks before engaging in sex.


Yeast infection is caused by a fungus named Candida Albicans. Having these fungus doesn’t mean you have an infection though, as they are naturally present in a healthy vagina. The problem arises when the population grows past a certain threshold.

There are several factors which cause this overproduction of candida fungus, some of which are certain antibiotics, weak immune system or pregnancy.

This disease, unlike the previous ones, is not considered to be an STD since it’s not transmitted sexually. There are plenty of cases where women developed a yeast infection without being sexually active.

If we rule out pregnancy, treatment is simple; you will be given some anti-fungal creams to apply at home or some over-the-counter medication. When a woman is pregnant, the treatment might be a bit more complicated and seeking medical help is a must.

Causes Of A Watery Discharge

As we already mentioned earlier, a clear discharge is normal and healthy, if you notice a change in colour or consistency, chances are something is wrong. There are a few other causes we haven’t mentioned so far, these are: 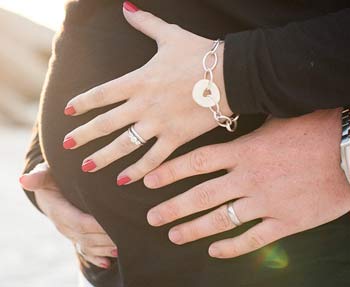 Researchers believe that this is due to the hormones going wild as a woman’s body is preparing itself for pregnancy. One of these hormones is estrogen, whose numbers rise soon after fertilization. Some women don’t even notice this occurrence, while others may be stunned by an enormous increase in the amounts of this discharge.

Having unprotected sex at the time of the ovulation may also lead to some clear discharge, which is not a cause for concern but it you notice this discharge smells or burns, you should contact your doctor.

Some women might even notice a few drops of blood in this discharge, but this can also be a normal occurrence. But only if it happens ever so often, if you start noticing it regularly, seek medical help.

Ovulation is the right, and the best time to get pregnant, you already know this of course, and if you do not want a child, you should use condoms… or wait till you stop ovulating. The number one reason you can get pregnant during this time is an egg cell ready to be fertilized and a watery environment, perfect for a sperm cell to quickly swim through it.

In every other situation, cervical mucus protects you from an infection, but in this particular case, it makes the surrounding less acidic and helps the sperm in reaching its goal.

If you pay close attention to your body, you will notice this happening 2 to 3 days before the ovulation. During this period, you should always carry an extra pair of panties, because this increased discharge and trickle can make the ones you are wearing unusually wet. Once again, this is entirely normal, and it’s not a cause for concern.

Watery discharge after sex is also standard, the sexual arousal itself induces this. The fluid is produced to make sex more enjoyable, and the “surfaces” more slippery. This increased fluid production will stop on its own.

Now, there are some instances where you should be worried:

Do You Have A Dislocated Rib? – Find Out How It Feels: