What Is A Swollen Earlobe?

A swollen or inflamed earlobe is an inflammation of the earlobe following an infection. They may also occur around the ear’s cartilage, also called perichondritis. Oftentimes, they are red, mild, painful or uncomfortable (or a combination of two or more of the listed symptoms).

The lumps in the lobes are rarely serious and usually disappear without intervention. However, they can be painful, especially for people who wear earplugs, earrings, headphones, protective equipment and other devices or covers that go over the ears.

Swollen/inflamed earlobes are often caused when an injury is sustained in the ear after a surgery; piercing of the ear (especially when the cartilage is pierced); contact sport; or trauma. However, the causes span wider than this. We will extensively talk about these as we progress downwards the article.

What Is An External Ear Infection?

Technically called otitis externa, an external ear infection is the inflammation of an ear canal and the outer ear which may result in a chronic earache. Acute otitis externa consists of an inflammation of the external auditory canal which causes severe pain; swelling of the duct (which in extreme cases, may close completely); the appearance of secretions; sometimes the swelling of the region around the ear and rarely fever.

As external otitis is the most painful inflammatory manifestation of the ear, it often demands urgent consultation with otolaryngologist specialist.

The Role Of Bacteria In External Ear Infection


Naturally, bacteria plays an important role in the genesis of the disease, but, as epidemiology clearly demonstrates, they are not able to induce the disease by themselves. This means that there is an individual preparation for this type of infection, which evolves into illness in the presence of the favorable factors listed earlier.

Every summer, patients usually come back with a picture of acute external otitis. Performing a micro-otoscopic investigation in a period of absence of infection often allows the otolaryngologist specialist to find the predisponent factors that underlie recurrences, the most frequent of which are: narrowing (stenosis) of the ear canal, hypertrichosis (excess of hair) in adult male patients and chronic dermatosis of the ear canal.

A separate case is that of patients who work in agricultural setups such as livestock breeding. In these patients, besides the common risk factors, the contamination with fungi of the Aspergillus family, which is very common in soil and feeds, causes frequent ear infections and, sometimes, small epidemics in whole family groups.

External ear infections can be contacted through swimming, using of cotton swabs for the ear, excessive cleaning of the ear wax, lodging of foreign objects and insects, diabetes, tumors, scratching of an ear canal and during humid and hot weather conditions.

The incidence of the disease is very high in the summer due to the abundance of favorable factors such as heat, sweat, pool water chlorine, aquatic microorganisms (plankton), frequent penetration of shampoo, conditioner and other chemicals.

What Are The Causes Of A Swollen Earlobe?

It is essential to understand causes of the appearance of bulges in the lobes as it will apparently help prevent recurrence of new ones. Below are some frequent causes of swollen earlobes:


Lobe skin disorders can generate a lump in the area. Epidermoid cysts are little bumps which develop underneath the skin. They move when touched with fingers and are usually not painful. Nevertheless, according to a renowned healthcare research group, Mayo Clinic, they can sometimes be cancerous and will require urgent medical evaluation.

Those that are benign, like sebaceous cysts, sometimes form in the lobule, generating discomfort and pain. The National Library of Medicine (NLM) also found out that the sebaceous cysts are generated by the accumulation of dead epithelial cells as well as oil products of the sebaceous glands and may also develop in the auditory canal.

Inflamed or swollen hair follicles can cause a condition called folliculitis, a condition which can lead to protuberances in the lobe. Sebaceous cysts form following an obstruction of sebaceous glands.

The cystic epithelium of the sebaceous gland gradually expands the contents of the formation of the retention of cysts. Sebaceous cysts often occur slowly. They are round with the surrounding tissue and are generally without symptoms.

Sebaceous cysts are most common among adolescents, especially unmarried men because they are actively energetic and secretive. Therefore, when sebum-like substances are not cleared in time, they tend to accumulate in the ear lobes, forming sebaceous cysts. It’s like a long hard bag in the ear lobe. If uncritical sebaceous cysts are not cured, they often disappear. However, if they seem abnormal, you should not rush to deal with it, be sure to go to the hospital for diagnosis.

To prevent a sebaceous cyst from forming, it is advisable for youths, in general, to pay attention to hygiene in their daily life. When washing your face, remember to clean the surroundings of your ears.

Trauma or injury to the lobe can generate lumps in the area. A scrape or cut by the ear may cause a bump just as the wounds heal. The bite of an insect can generate a temporary one that can get worse when one scratches or rubs it. The wounds resulting from a blow are also a cause for the emergence of protuberances. Any attempt to drill the lobe using equipment that is not sterile can also cause them, in addition to generating infections that worsen them.

Inserting dirty or infected objects such as rings or bars also generate bumps in the area, especially if they are forcibly inserted without first performing the lobe perforation.

People with infected cyst in the lobule may also grow a lump. The original may enlarge due to infection. Hence, becoming more painful, while it swells and become tender to touch. The same happens with folliculitis. Too much exposure to the sun can also irritate the sebaceous glands of a human’s skin and a lump may develop in the lobule, especially since these areas are not wearing sunscreen as often as other body parts.

Usage of some beauty products like soaps or face creams may irritate the skin and as a result, a bulge may develop. The same can happen when using hoops. People having acne in the lobules may also have lumps if they squeeze or burst the lesions generated by the condition

One of the frequently reported cases of swollen earlobes is that contacted after an ear piercing, especially when performed through the ear cartilage. You may need to consult an ear expert if you begin to observe pain, redness, or inflammation around the pierced part of your ear.

The simplest way to avoid infections around your ear through piercing is by completely avoiding having your ear pierced through the stiff cartilage. Ever since cartilage piercing gained popularity, the cases of chondritis and perichondritis infections have been on the rise. 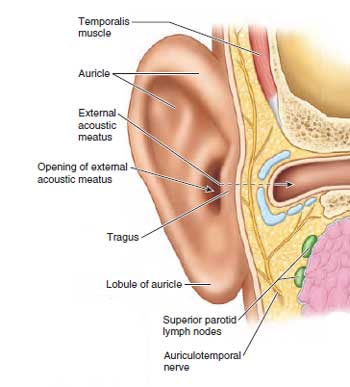 Swollen lymph nodes are long hard bags inside the ear lobe. Many people have experienced this under normal circumstances. It is as a result of lymphatic inflammation caused by swelling. Usually, the lymph cannot be clearly touched but they feel swollen and like a hard bag. They are generally located on the surface of the bones in the middle of the ear lobe and the subcutaneous layer.

Don’t bother to deal with it, and don’t touch it often. You can try to take some anti-inflammatory drugs, remove heat from your body and see if there is any shrinkage. If you really don’t see any improvement, go to seek a doctor’s advice.

The best way to treat an inflamed or swollen lobe ear depends on what is causing inflammation.

Inflammation caused by drilling or insect bites, in general, can be treated by using home and counter medications. Inflamed earlobes caused by an insect, bug or spider bite can be treated at home. You can treat this by washing the stung area with soap and water and then apply an antiseptic/ such as hydrogen peroxide.

After doing this, apply a cold pack in the inflamed area and take analgesics to treat your discomfort. If the ear is very complicated, then you may have to take an antihistamine. However, if you feel much pain in the ear and it doesn’t improve after a few days, you must seek medical attention to prevent the possibility of permanent deformity or deafness.


To treat an inflammation caused by an infection, a boil or cyst, you need to see a health specialist for antibiotics to use or for him to remove the boil. Never make an attempt to burst and drain the cyst or boil yourself as this could result in you breaking and spreading the infectious fluid all through the rest of your ear.

For inflamed earlobe caused by trauma from a direct blow, especially in people who practice contact sports, you can apply ice wrapped in a towel on the affected area and take over-the-counter analgesics. If the ear is very swollen, red, purple or white, you should consult a healthcare provider immediately, as this could lead to permanent deformity or hearing loss.

You can also have an inflamed earlobe due to allergic reactions to something that has touched the ear. For instance, soap, cream, shampoo, etc. In this case, the best treatment method is to remove the source of the allergy, apply cold packs and use some analgesics. This should reduce swelling within a few days, but otherwise, you should see a medical professional for prescription of antihistamine.

To prevent earlobe inflammation, it is also important to know where to do drilling during piercings and using sterile equipment only.

In view of the importance of the role played by predisponent factors in the genesis of acute external otitis, it is obvious that a preventive treatment of the pre-existing problems will avoid violent, annoying and recurring infections during the summer.In acute phases, it may be necessary to administer systemic antibiotics whose efficacy is often limited by the type of bacterial flora.A systemic antibiotic treatment for such germs involves the frequent use of highly toxic substances.

The ENT specialist, according to the clinical picture, can decide to perform a local therapy, with delicate aspirations of the pathological material and dressings of the external auditory canal. This treatment is always very effective and allows one to avoid systemic antibiotic therapy and the inconveniences that may follow.

You Can Predict And Prevent Back Pain During Pregnancy

Bruised Finger – Why It Happens And How To Treat It!